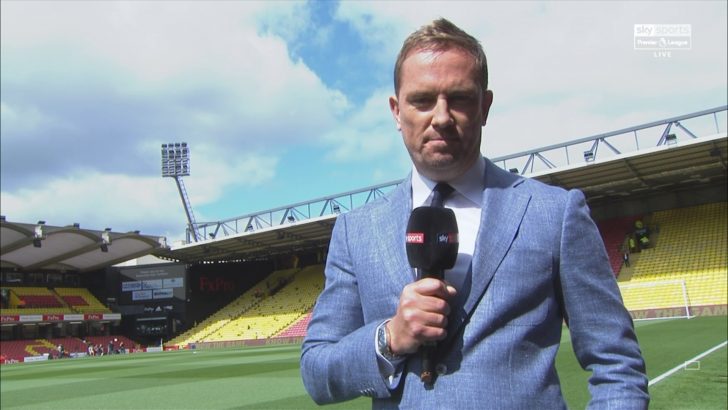 Simon Thomas has announced he is to leave Sky Sports at the end of the current football season.

“Simon has suffered an unspeakable loss and we have done everything we can to ease the burden he is carrying,” said Barney Francis, managing director of Sky Sports.

“I spoke to Simon this morning and fully support his decision.

“He is part of our family and always will be even now as he searches for his next path.

“If there is some small positive he can take from this experience it is the courage he has shown in opening up, and for others facing the same challenges I know they will take comfort from his actions and his words”

Simon joined Sky Sports in 2005 after 13 years at the BBC. He started as a presenter on Sky Sports News before moving on to front Sky’s coverage of EFL, League Cup football and Premier League coverage.

In his latest blog posting, Simon says: “I have had so many messages over the past few weeks. Ninety nine per cent of them have been quite simply lovely, but one of the recurring questions people have asked me on social media is: “when are you going back to work?” When are they going to see me on their screens again? Some have been less helpful and simply told me to sort myself out and get on with it. If only it was that simple! But most have just been well-wishers hoping I’ll be back presenting the football again.

“However, after many, many weeks of wrestling with the question of what to do, I wanted to put it in writing what I have decided, and it’s with a heavy, but peaceful heart that I write these words: I have decided to leave Sky at the end of the season.”

He goes on to thank Sky and fellow colleagues:

“I want to thank the late, great Vic Wakeling for having faith in me all those years ago. For being prepared to give me a chance when others had shut the door. I want to say thank you to everyone I’ve worked with over the past thirteen years: the guys at Sky Sports News, the legions of unsung heroes who work behind the scenes on the football, and also to David Jones and Kelly Cates, both of whom have taken on a bigger work load in the months I’ve not been able to work. Both are class acts and both have been brilliant in their support of me since Gemma went.

“But the biggest thank you goes to Sky itself for the unswerving support they have given me over the past few months, not just when Gemma fell ill and in the aftermath of her death, but also in the weeks before when I was suffering from anxiety and depression.”

Mr Transfer Deadline Day – Jim White – has announced he is leaving Sky Sports. In a posting on Twitter, Jim said: “Breaking News!! After 23 fantastic years, it’s time to bid farewell to Sky Sports. “After much thought and… Read more

The sixth round of the 2021 Formula One season takes place this weekend at the Baku City Circuit. A dramatic turn of events in Monaco saw Max Verstappen and Red Bull take the lead in both the drivers and constructors’… Read more